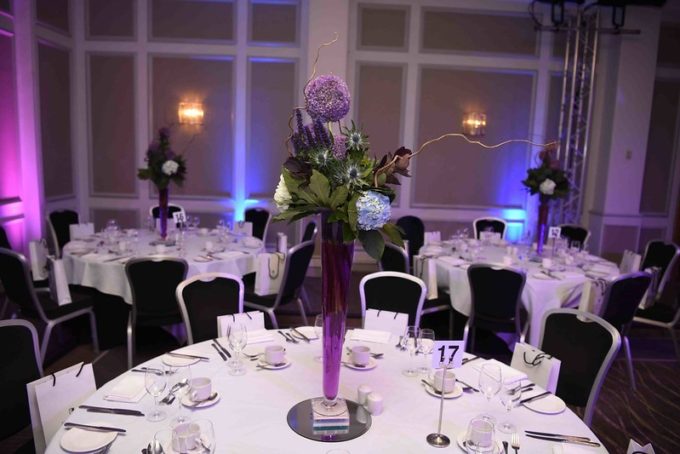 Last week I attended a fabulous and very glamorous event at a hotel in the heart of the city of Birmingham: the Macdonald Burlington Hotel.  It was the unveiling of the spectacular grand ballroom of the Macdonald Burlington Hotel, Birmingham, following an ambitious renovation project.  Investment in the Macdonald Burlington Hotel has exceeded £1million, with the 500-person capacity Horton Suite undergoing the most extensive revamp.  As well as modernising the colour scheme, state-of-the-art sound and lighting features have been installed, and an integrated dance floor has been created at the heart of the room. Four magnificent chandeliers – the striking centre pieces of the suite – were dismantled, restored and rebuilt by hand, and the internal bar redesigned to include additional seating.

The renovation is part of an ongoing project to reposition the hotel’s conference facilities as the city’s premier standalone multi-purpose events venue. Earlier this month, Macdonald Burlington Hotel was shortlisted for the prestigious Catey Awards, and was previously awarded the BDRC VenueVerdict Gold Standard Accreditation for outstandingly high levels of customer satisfaction.  Derek McDonagh, regional managing director, said: “After months of work, it is such a wonderful feeling to officially unveil our state-of-the-art meeting and event facilites to the world.

“Our Horton Suite has always been one of the biggest event spaces in the city, but now it is definitely one of the most stylish. It was an extensive project and no detail has been overlooked. Materials were sourced from around the country and specialist craftsmen completed intricate projects, including the restoration of the chandeliers. We worked with many fine Birmingham-based tradesmen to complete construction in a careful but timely manner. The final event suite is both grand and opulent, but also feels modern and contemporary. All facilities have been completely refreshed, and the room boasts excellent lighting and hi-tech equipment.”

The launch event was a celebration for more than 200 guests, including local councillors, industry leaders and members of the business community.

The completion of the Horton Suite follows an extensive modernisation programme, which saw more than 16 meeting rooms undergo refurbishment. Each room was fitted with 75” flat-screen LCD screens and state of the art ClickShare technology which allows multiple delegates to connect their devices to the main presentation screen and share content at the click of a button. Delegates will also have access to  Meet Point Network, which offers delegates a space to network before and after meetings.

A little earlier this year we visited Barcelona.  It was our second visit to the Catalan capital and both times we’ve visited we’ve stayed in 4 or 5 star hotels.  This time we stayed in the four star Hotel España and we much prefered it to the 5 star hotel we stayed in previously.

I think location is key in Barcelona.  Yes, there is a good public transport system, but it’s much better to be at the heart of things rather than having to commute in all the time.  The Hotel España is situated in an old quarter of the city, just a minute or so’s walk from Las Ramblas.  Both the Gran Teatro del Liceo (theatre) and La Boquería Market are just a minute’s walk away too.  If you face onto the street, you’ll probably want your windows closed at night because there are often people walking past, but the air conditioning is good and quiet, so this isn’t really an issue.

We had a standard room.  It wasn’t enormous, but I think you tend to expect that in a centrally located hotel.  It was nicely furnished and had everything you’d expect.  The only thing that we found was a bit of a pain was that I couldn’t turn on just a bedside lamp on my side of the bed.  I could either turn on everything or nothing.  The bathroom was sleek and modern.  My husband, the shower connoisseur, was satisfied with the shower arrangements.  There wasn’t a bath.

We did eat at the hotel’s restaurant,  Restaurante Fonda España, on our first night, a Friday.  It was the only night that we could get a reservation due to being busy one night and being closed one night (Sunday).   The decor of the restaurant is stunning, like so much of this hotel, and there are so many details to take in. It’s almost worth eating here to have the chance to drink in all the designs.

The Restaurante Fonda España describe their cooking as ‘a commitment to the most traditional style of cooking, while embracing modernity’.   However, we didn’t really pick this up from our own meals there.

In fact, we found the food dull and uninspiring and whilst it was the most expensive food we ate whilst we were in the city, it was far from the best that we sampled.  I would recommend having side dishes of vegetables or salads as despite the prices (and this is common in Spain) the main courses don’t come with much in the way of vegetables.  We tried dessert too.  As you can see it looked very nice, but it didn’t really deliver in taste terms.

It’s a buffet breakfast at the hotel each morning, but in a setting that is out of this world.  You’ll be transported under the ocean in a magical world of mermaids and sea creatures.  The decor is breathtaking and the walls are tiled up to the high ceiling with under sea motifs.

Looking back at my review I can see I have criticised the food, but I don’t want this review to come across as negative.  If we were looking to visit Barcelona again, and our budget allowed, I wouldn’t hesitate to book in again at this hotel.  The combination of a great location, stunning decor and good customer service made it a real winner for me.  The hotel is justifiably proud of their interiors and they do run regular guided tours (for an extra fee and you need to book, but you could just pop in for a nose around especially if you were eating in the restaurant or drinking in the bar).

For a quick snack or a light lunch try the La Boquería Market – walk towards the back for stalls selling more substantial snacks and meals.

Gadds Town House is a boutique hotel in the building of an eighteenth century Georgian townhouse.  We stayed there last month and travelled by train.  It is possible to walk from the train station to the hotel if you don’t have heavy bags.  It took us about 15 minutes.  Alternatively, it’s easy to get a taxi from the station.

Gadds Town House is located on Old Elvet which is a street with plenty of character and mostly Georgian buildings within easy walking distance of the main shops, the castle and the cathedral.  We also walked from the hotel to the university campus during our stay and it’s conveniently placed for that too.

Opulently decorated throughout in a period style, Gadds Town House is very atmospheric.  We were greeted by friendly staff and taken to our room on the second floor.  We were staying in La Rouge which is towards the cheaper end of the tariff.  Our room was sumptuously decorated and felt very luxurious.  It was a fairly compact room though, so not one to pick if you intend to spend a lot of time in your room or you like a lot of space.  Built into the dividing wall between the en-suite and the bedroom is a generous rainfall shower.  When we arrived the curtains were drawn back, but we soon closed them as we aren’t the exhibitionist type.

There’s under floor heating, plus a stove in the fireplace, if you need an additional blast or simply want the cosy look. Provided with the room are complimentary bottled water, Molton Brown products in the bathroom and a good selection of teas (herbal, fruit, speciality and English Breakfast) plus coffee sachets and hot chocolate.  Milk is provided in UHT sachets or you can ask for fresh milk if you prefer.  We had a king-size bed which had a good view of the flat screen TV.  Generally, we were very happy with our room, but in the interests of honesty, we did find some hair grips on the floor, which suggested that the vacuuming hadn’t been completely thorough (although otherwise the room was clean).  I also found the sink tap a bit difficult to turn off properly and it was a bit tricky to stop it dripping.  My husband was impressed by the rainfall shower which provided plentiful hot water at a constant temperature (something he often moans about it if isn’t right).

Breakfast was served in the restaurant until 10am.  There’s a good range of choice from cereal and fruit to a mixed Durham grill or Eggs Benedict. You get fruit juice, toast and hot drinks too.  Order from the menu and it’s served to you at your table by the waitress.  I enjoyed my Durham grill each morning (pictured), while my husband experimented a little with menu.  It’s a good-sized breakfast, filling but not enormous.

During our stay we also sampled cocktails at the bar and had dinner one evening in the Gadds Town House restaurant.  We did try to eat there on our second night too, but it was pretty much booked up, so it would be wise to book in early.

I found it impossible to get the free wi-fi to work outside of the bar and the reception area (on my iPhone), even the restaurant area on the ground floor seemed out of range.  That said, my husband did manage to get wi-fi on our tablet in the room.  I couldn’t get much in the way of a mobile signal either with Vodaphone.

Overall, we thoroughly enjoyed our stay at Gadds Town House.  It’s a small hotel with good, friendly service and I’d certainly consider it if I was visiting the city in the future.