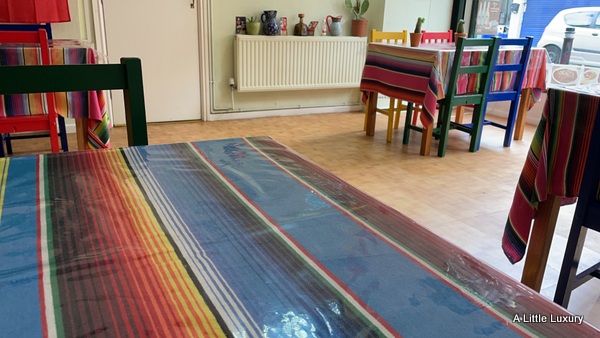 I’ve been meaning to try out the A La Mexicana Restaurant for a while, but the pandemic has got in the way.  The restaurant is situated on Sandon Road in Bearwood, close to T C Hayes, and diagonally opposite the Bear pub.  A La Mexicana is a family run, Mexican restaurant and it is decorate with bright primary colours and lots of authentic Mexican items.  Everything was spotless and the tables were cleaned down well after customers left.  It was a reasonably warm day and the door was left open, so there was plenty of ventilation.

We were greeted by a friendly Mexican host, who was keen to make sure we were comfortable.  He was happy to help guide us through the menu, which is just as well as it was tricky to pick out which of the delicious-sounding dishes to try. I think I’m going to have to go back to try out some more.

The Menu A La Mexicana

There are three sections to the menu: lunch (lighter items), dinner (bigger dishes) and drinks.  We visited at lunch time and could choose off both the lunch and the dinner menus.  Soft drinks and hot drinks are currently available and are reasonably priced.  The restaurant is currently unlicensed, but I understand that they hope to change that.

We decided against a starter of nachos because my friend had a tooth infection and wanted to eat soft things.  Our host helped us find just the right thing: burritos.  Despite eating at lunch time we ate off the dinner menu because we wanted a more substantial meal.  The burritos came with a choice of filling: steak, pork, chicken, ham, chorizo or vegetables.  My friend decided to go for the  chorizo, which is homemade on the premises.  I liked the sound of the slow cooked pork, but it was too early in the day for that to be ready (because it is cooked long and slow), so I went for the pork and caramelised onions.  This wasn’t actually specified on the menu, so it’s worth talking to your server before deciding on your choice.

Our burrito meals came similarly presented with salsa in the lovely, colourful mexican bowl.  There was an attractive side salad with peppers, tomatoes and avocado.  The burritos were well wrapped and easy to eat with hands: very little escaped. My pork was nicely spiced, but not too hot (I tend to prefer things to be reasonably mild). As you can see inside there was a mixture of rice (I could have chosen beans instead), pork and carmelised onion.  It was delicious, tender and moist .  My companion really enjoyed her chorizo burrito.  As I think you’d expect it was a bit spicier than mine, but I’m tempted to try that next time or maybe the slow cooked pork.  I’m spoilt for choice.

Portion wise it really was a main meal.  My lunch companion took the second burrito home to eat later.  I just about managed my two burritos, but didn’t have an appetite for the rest of the day.

The service was timely, attentive and friendly.  We had a warm welcome and my friend is already talking about taking other people there because she enjoyed it so much.  I know other people who have been and they have really enjoyed it too, so much so that they have already made a return visit.

Other restaurants to try in Bearwood include The Old Dresser.