Hengata has recently come to Harborne, in fact I think I was there on the second night after it had opened its doors to customers for the first time.  Located in the School Yard development on Harborne’s High Street, it’s an atmospheric building which used to be a Victorian school.  I think the Hengata might be in the former school hall judging by the architecture. 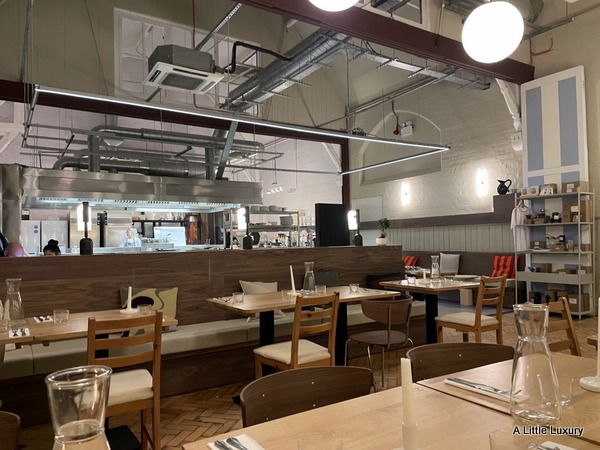 The interior is stylishly done.  You can see the original features of the lovely old school, and it’s all open plan, but there’s a modern twist too.  The tongue and grove paneling on the walls has a very Scandinavian vibe in any case, but there’s lot more wood in the form of the tables, chairs, flooring and dividing panels. To soften the wood there are plenty of comfortable soft furnishings.  This means that the room has good acoustics as the sound is absorbed, so it’s easy to hear each other speak.  I like that you can see the kitchen at work, but there’s also a bit of a divide so you can get a little distance from it too.

The table settings are simple, but elegant.  I was seated on the bench which was very comfortable.  The waiting staff were very warm and welcoming.  There were a few teething issues with the service (as it had only just opened), but I do think where there is a smile, plus a willingness to help and put things right, it bodes well for the future.

As Hengata is a Finnish venue, beers seemed more appropriate than wine.  I liked that they included some local beers on the beer list from Attic Brew Co, which are based in Stirchley.  I fact we tried both their Helles and their Intuition brews.  They have a good range of lagers and pale ales, as well as a stout and a cider to choose from.

For starters, we picked the home smoked mackerel pate and the bone marrow. The pâté came with a sourdough crisp, deep-fried seaweed cucumber, and apple salsa.  It was a tasty pâté with the flavoursome mackerel.  It would have been nice to have a little more sourdough, as there was quite a lot of pâté.  The seaweed cucumber and apple salsa provided a welcome freshness and contrast. The bone marrow was grilled and served on toasted rye bread, with a compote of unripe berries and green onion.  I’d not tried bone marrow previously and I really enjoyed the umami flavour and it had a welcoming and warmy buttery and creamy taste. I loved the depth of flavour which was rich and savoury.

For main course we chose roasted and glazed free range chicken and black bream fillet.  The roast chicken was of very good quality and melted in the mouth.  It was served with wild watercress, warm salad of chanterelles and corn.  We picked out a side of fries to go with the dish. I’d have described them as chips, rather than fries, but they were lovely fluffy chips that complemented the chicken dish.  The black bream was a very popular dish, in fact as we were leaving they had run out of it.  The fish was well cooked and tasty.  Served with potato rosti, raw fennel, sauce of sour beer and pumpkin seed, which went well together.  I ordered a side of leeks, peas, and pancetta, which was a delight.  The peas really lifted the dish with their sweetness.

Whilst we were tempted by the dessert menu, we couldn’t manage any more food.  I’m keen to go back to Hengata, Harborne and try the puddings and the hot smoked trout on another occasion.