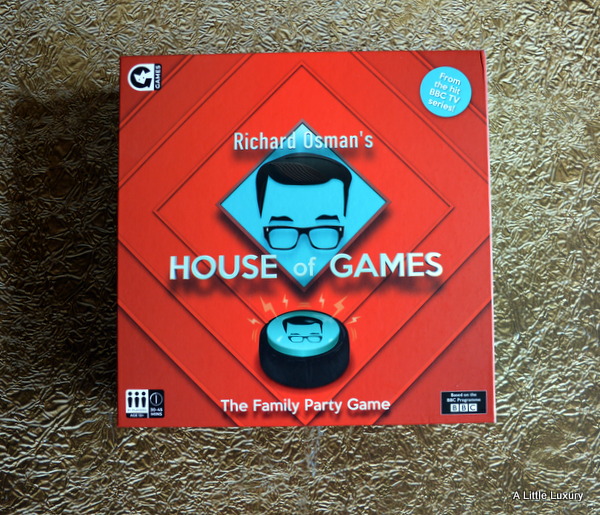 We have been avid fans of Richard Osman’s House of Games for a long time now.  It’s standard tea time viewing in this house.  I love the mix of games, the contestants and pitching my wits against the questions as the show airs.  Would it work as a board game though?  I was interested to see how well the series would adapt to the board game format.  So when I was offered the chance to review a copy of the game, I jumped at it.  Read on to find out how we got on and what we thought of the game as we played it.

If you have not watched House of Games, this is the simple premise: the contestants either pair up or go against each other to answer or solve word-based tasks for points.  They do this over the course of a week, but each programme can be watched on its own.  Each day the winner of that day’s programme gets to choose from a selection of branded, rather kitsch prizes with the House of Games fondue set being my personal favourite.  The boxed version follows the same premise, only you won’t play it over a number of days and the prizes are up to you.

There are six categories or rounds to choose from and a final seventh round, Answer Smash, which always ends the game. Four of the rounds are chosen at random and slid into a card holder – this determines the order of the rounds and the rounds that are actually played. Now it suggests that this game can be played by 3+ players. But it’s better played as a group of five (or more in pairs so 7,9, etc.).  This is to make it work better as some of the rounds are played in teams and one of the players acts as the Question Master.

Each round has four questions asked, and the fifth round is always the same but also has four questions – points are gained for correct answers and whoever has the most points at the end, wins.  The prize is a Richard Osman-themed cardboard trophy.

Richard Osman’s House of Games is good fun, but I’m not sure how good the repeat play value is.  I think there could do with being a few more different cards for the various rounds, to keep you playing longer.  That said, I don’t think we’d often have the right number of people in the house to play this at its best, so perhaps that wouldn’t be that much of a concern.

One of the joys of the game for me is that it isn’t a straight forward quiz game like say Trivial Pursuit.  The questions are a bit different and will give your brain a work out in a quirky way.

3. The winner or winners will be chosen by a random draw using the competition widget.

6. Competition closes at the end of Sunday 3rd October 2021.

Disclosure: I was sent a copy of the game for the purposes of this review.