We went to Marco Pierre White Steakhouse Bar & Grill in The Cube in Birmingham the other week.  We’d had lunch bought for us there as a Christmas present and we needed to use the voucher before it expired.  Booking online was easy enough, but we got a distinctively unfriendly acknowledgement email laying down all sorts of rules and regulations: arrive 15 minutes before your booking; don’t be more than so many minutes late; we’ll charge you extra for a window seat; if you want a doggy bag you’ll have to sign a disclaimer.  It was all a bit off-putting and it didn’t get things off to a good start.

When we got there though it wasn’t quite like that.  We had a window seat and so did most people who were there for the lunch sitting.  There was no extra charge, maybe there is in the evening.  The room is what you expect from a high-end restaurant with thick white table cloths and the like, but what sets the restaurant out is its views.  Originally, my husband sat in the window with me facing, but he couldn’t cope with that (he’s scared of heights), so we had to swap.  Heights bother me not at all thankfully and I enjoyed looking around the panoramic view of my city.  It was really strange to look at places I know so well from high up and see how they join up including the bits you don’t usually see like the train line corridors.  I guess at night you can see the city lit up, but I think the daytime view was more interesting.

The lunch menu has a limited choice (as you’d expect), but we had no problem making a choice.  I went for the Caesar Salad which I was intrigued to see included avocado.  It didn’t work very well.  The avocados added nothing to the dish and it needed more crunch (there weren’t that many croutons).  A Caesar Salad is a classic dish that lots of chefs like to play around with to put their own individual take on things.  Generally, I find messing around with this classic combination doesn’t work well and this dish was no exception sadly.

My husband chose a little better with his crispy Calamari Rings served with a tartare sauce.  They were everything you’d expect: a simple dish executed well.

I had the Fish and Chips for my main course.  It was a lovely piece of fish which had been nicely cooked.  The fish was enormous though and I struggled to finish it (but I didn’t dare ask for a doggy bag). If I was going to criticise I’d say that it would have been nicer to have had less fish and few more chips to achieve a better balance. 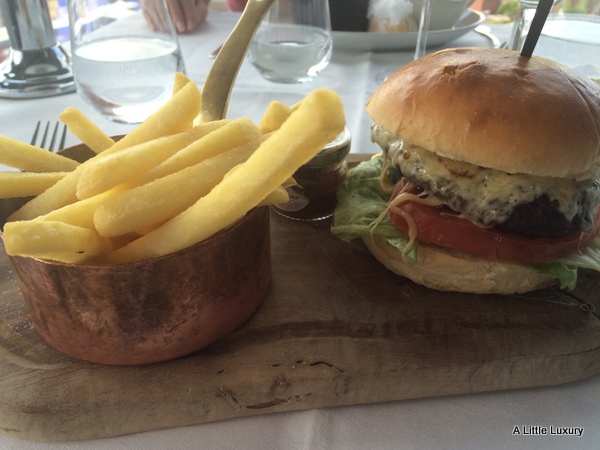 My husband’s burger arrived on a wooden board which was a bit disappointing.  I really wish restaurants would move away from this nonsense: I’d rather have my meals on a plate.  Also I prefer to have my food together, rather than divided up with the chips in a separate little copper pan as they were with this dish.  No complaints on the taste front and this was a quality burger (my husband is very fussy about his beef).

We both went for the Creme Brûlée with Raspberries for our dessert.  This looked lovely and was nicely prepared.  The only thing was that using a shallow, wide dish meant that you got a lot of the burnt caramelised layer in proportion to the creamy layer beneath and we felt that the balance was out because of it.  It’s a shame because if it had been served in standard ramekin, it would have been perfect.

The service was good at Marco Pierre White Steakhouse Bar & Grill and we liked the fact that they had a bar area so you could have a drink before or after your meal if you wished.  The food was good, but nothing outstanding, so you are paying a premium for the name and the view at £25 for a three course meal.  That said, it is worth visiting for the view alone.