I fancied trying out something a bit different and Rodízio Rico with its Brazilian offering seemed like just the thing, so I popped along to try the food and experience the restaurant as it’s been somewhere I’ve been thinking of going for some time.  Rodízio Rico has a fun concept: there’s a buffet with salads, side dishes and even full blown meals.  You can go help yourself as many times as you like and they keep refilling it.  You get given a disk for each person at the table.  On one side it’s red and the other green.  When you have the red side up you don’t want any more or just want a bit of a break, but when it’s green you get offered meat by the servers who move around the restaurant.  They bring out a range of meat on skewers and you can try as many as you have room for.

As we arrived we were asked if we had a voucher or a code and there are often Groupon deals or similar for this restaurant, so it’s worth checking in advance. We were seated and given the drinks menu.  I asked for a pint of Bass which I was encouraged to see on the menu, but it seems that they didn’t have this on and didn’t have a suitable alternative either really.  I had to have Guinness instead which isn’t really the same at all, so that was disappointing. 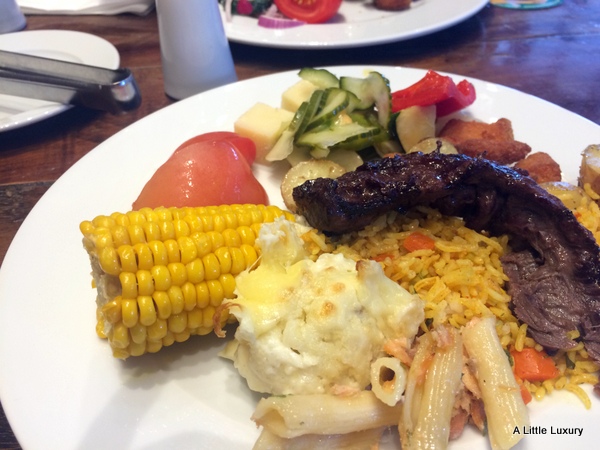 The buffet was well presented with a wide range of dishes from simple bread rolls, vegetables and salad ingredients to more complex salads, side dishes and even complete meal like lasagne.  You can eat very well off just the buffet to be honest, although its the meat that is the star of the show and certainly what you are paying for and expecting.  The buffet was well kept (it looked fresh and appetizing) and kept refilled.

After we had our buffet salads and accompaniments, we started to get approached by the waiters with their large skewers of meat.  They carve it at the table and serve it straight to your waiting plate. I really enjoyed the meats especially the beef steaks and cuts.  I was less keen on the sausages and felt that the chicken could have done with a little in the way of flavouring.  There was plenty to go round and we had no problem at all getting enough to eat.  The dinner menu has more expensive cuts of meat and more variety, but is more expensive than the lunchtime deal.

It’s a fun place to eat and there are good views over the canal if you are lucky enough to get a window seat (in fact I would ask for a window seat if you book in advance).  There’s so much choice there should be something to suit all meat eaters and vegetarians can have most of the buffet food and pay a reduced price (not sure I’d be that keen on coming though as a vegetarian because the meat is very much the centrepiece).