Sadler’s Brewing Co. has announced the launch of Brewer’s Social Harborne, the third venue in its expanding roster which includes Sadler’s Brewhouse & Bar in Lye and Sadler’s Taproom Quinton.  My brother’s father-in-law is a big Sadler’s fan and has visited both Sadler’s in Lye (for a brewery tour) as well as the Quinton Taproom, which is one of his locals.

A place to be social no matter what time of day, Brewer’s Social will be a permanent fixture (rather than just a pop-up) and will create over 20 jobs when it opens on Friday 27th September 2019 from midday, in the former home of the Sadler’s Pop-Up, on Harborne High Street.  Harborne’s busy high street seems like the perfect place for Sadler’s as many local people travel into Harborne for a local night out from the surrounding areas.

Alongside Sadler’s award-winning ales and spirits, the all-day venue will offer collaborative and special edition brews; craft spirits and cocktails – and great food.

From brunch and morning coffee and cake, through lunch to an exciting evening menu featuring unique slow-cooked and BBQ dishes, sourcing and provenance of ingredients will be at the heart of everything.

Sadler’s Brewing Co. managing director, Chris Sadler, said: “We want the ‘social’ part of the name to really mean something and for Brewer’s Social to appeal to everyone, with special community events, brewing collaborations and fundraising for local charities.

“Following the success of the Harborne Pop-Up, the logical next step was to install a kitchen and expand the offering; we’re really excited about this new chapter – with lots more in the pipeline.”

We were greeted with a very refreshing gin and tonic and I sat with a local couple who were shareholders in the company.  This might sound like something that is out of reach for most people, but the company isn’t publically listed and you can buy a share for £25.  Even with a single share you get a 5% discount in BrewDog bars and a 10% discount online, but more shares mean bigger discounts and other benefits too.  The couple I sat with were enthusiastic ambassadors for the company and clearly felt like part of a community.  They were regular purchasers online and had even made it to the AGM in Aberdeenshire!

Having seen and heard so much passion from their customers, I was interested to hear about the distilling of the spirits.  It was really interesting to hear from Brewdog’s Steven Kersley (Head Of Distillation) because his knowledge, expertise and enthusiasm shone through.  We started tasting the pure spirits as he talked about each one.  Before we tried each one, we were encouraged to swill it around in the glass and take a good smell, a bit like you do at wine tastings.  We also tried the tasting process with a cube of ice in the drink – it was amazing how it was so much more difficult to smell the spirit once we’d done this.

We started by trying a number of the gins.  First up was the LoneWolf gin which comes in a bottle with a very striking wolf label.  This was the gin that was in our gin and tonic, but we also tried it neat. Obviously for a gin, it’s the botanicals that really make it taste good and I was amazed at the level of thought, detail and experimentation that goes into selecting the right ingredients.  We heard about the search for the best juniper berries; the importance of bringing in Scottish ingredients like pine needles; the various methods for extracting the flavour; and the vast number of distillations taken to fine tune and hone the final product.  Next up we tried a delicious variation on the LoneWolf gin theme: LoneWolf Cloudy Lemon Gin.  The gin is macerated in fresh Sicilian lemon peel for seven days to get a real punch of lemon flavour.

Next we tried the uncompromisingly pure single-malt Rogue Wave vodka. Vodka isn’t my favourite drink, but this one is a smooth, confident spirit.  It benefits from the careful four times distilling process that brings forth all of the flavour, and the single filtration to hand onto all that taste.  It’s typical of Brewdog’s commitment to quality that they put so much effort into making a quality base spirit.

Overall I was really impressed by the commitment and determination of BrewDog to make quality spirits with a great level of attention to detail.  I’ll certainly be back to try some of their beer and maybe buy a share or two too. 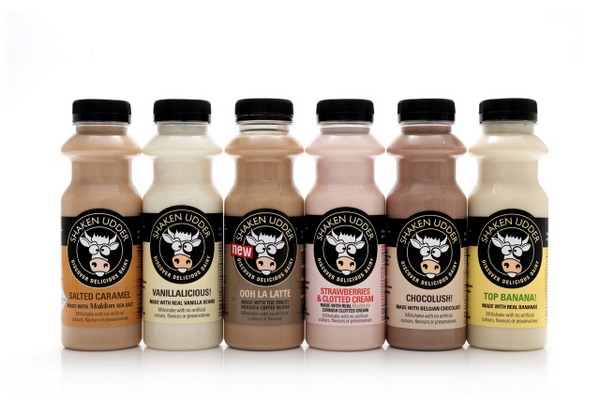 Have you heard about Shaken Udder yet?  If you love a good milkshake, you should really give them a try.  Shaken Udder produce a tempting range of both carton and bottled milkshakes that are perfect for both kids and adults.  Set up as a top-notch event based product, Shaken Udder began as a way of bringing quality milk shakes to the festival going public.   That was all the way back in 2004, and it wasn’t long before there was demand for great milkshakes all year round, so Shaken Udder hit the shop shelves in 2008.  Since then it’s been a story of successes and along the way many more stockists have been added (as well as online ordering) and there is a wide range of flavours, so there is should be something in the range to suit your taste buds.

One of the things I love about Shaken Udder is that they only use British milk, sourced locally to their factory, which cuts down on milk miles and supports local farmers.  Their bottles and cartons are fully recyclable, plus the bottles include recycled plastic.   They contain no nasties and are made from real ingredients.  As you might expect the milkshakes are packed with B12 and are a good source of calcium and protein.  They are so convenient to carry around and taking one to drink after a gym session is so easy.

I’m delighted to be able to offer a generous goody bag of Shaken Udder products (worth £30) as a prize in our latest competition, including a selection of shakes and a branded cool bag.   For your chance to win, enter via the Gleam widget below.

1. No bulk, third-party or automated entries.

3. The winners will be chosen by a random draw.