A little while ago the MyTrendyPhone Company asked me if I would like to try out one of their accessories for either the iPhone4, iPhone 4S or iPhone5.  It was a bit like being in a fabulous cake shop and being able to pick out whichever cake you wanted to eat.  Eventually, after much browsing, I settled on this Telescope Camera Lens.

Whilst my iPhone is very good at taking pictures, I’ve been feeling for a while now that I want to raise my game a little, but wasn’t sure whether to get a DSLR or not.  I’d heard about accessories for iPhones to enhance their picture taking capabilities, but I’d not had a chance to properly put them to the test.  So I was up for trying the Telescope Camera Lens out.

I tried using it at Blog Summit in Manchester, and found it a good way to get a close up picture of what was happening at the front of the room.  Also, it avoided having lots of heads in the way.  The only downside was that you need to hold the phone very steady or use the tripod provided to get a good shot.  I struggled a bit with holding it steady.  The tripod is very portable which is a good thing, but that means that the legs are quite small so you need a surface to rest them on.  So I decided to try taking some photos with the lens and the tripod combined.

I decided to venture into the garden and started experimenting with taking pictures of my flowers with the tripod on the ground.  This worked quite well and I felt quite the professional camera woman lying down on the floor to get the right shot.  I couldn’t quite get the shot that I wanted though despite the lens working very well for me. 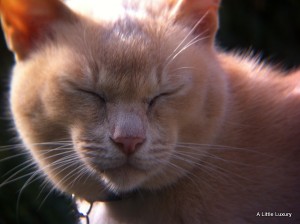 Then one of my cats (Amber) wandered out in the garden just in time to act as a model.  So here’s a series of pictures taken with the Telescope Camera Lens for the iPhone.  I’m really pleased with them.  I love the detail and focus, which concentrates on my cat as it should do.  Also, I’ve been able to capture expressions that are distinctly him without realising what I am doing.

I was able to take these of him sitting on the garden table with my tripod set up on the garden chair a little way away.  So I think the expressions I have captured are more natural for that.  I’m very happy with my Telescope Camera Lens and I think it will enable me to take my photography to the next level without the expense of buying a DSLR.